Additionally, the university has a guest house Alexander von Humboldt-Haus (H5 on the map), Eichendorffring 5, which is rather close to the university.

Location of the hotels and the bus stops 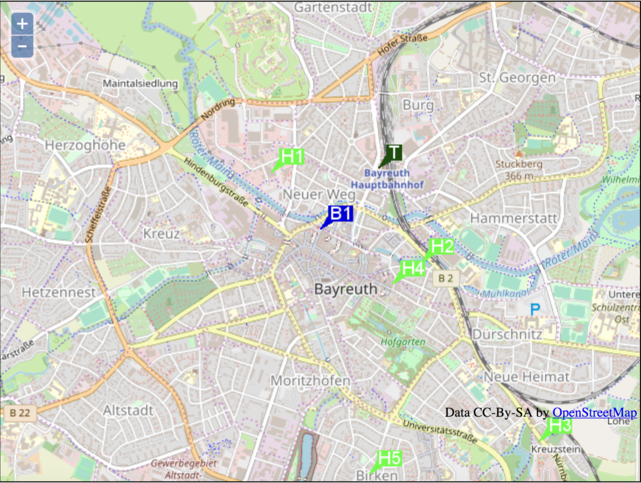 How to reach the Hotel and the University:

Hotel to university: From Hotel Arvena its a 900m walk to bus stop "Hohenzollernring" and bus 306 to university.
From Lohmühle and B&B, the bus stop "Oberfrankenhalle" served by the buses 304 and 316 is just a few 100m away. Alternatively, the Central Bus Station (ZOH) can be reached in under 10 min walking, from there bus 304/306 to university. In fine weather, you may also consider to walk to the university.
Unfortunately, there is no direct bus connecting Apart-Hotel FirstBoarding with the university, however it can be reached within a nice 1km walk.

Information about public transport in Bayreuth including bus lines can be obtained via the time table of the German Railways "Deutsche Bahn".

Walking from the bus stop "Mensa" to the institute

See also campus map of the university and the Info/Meeting points indicated there. 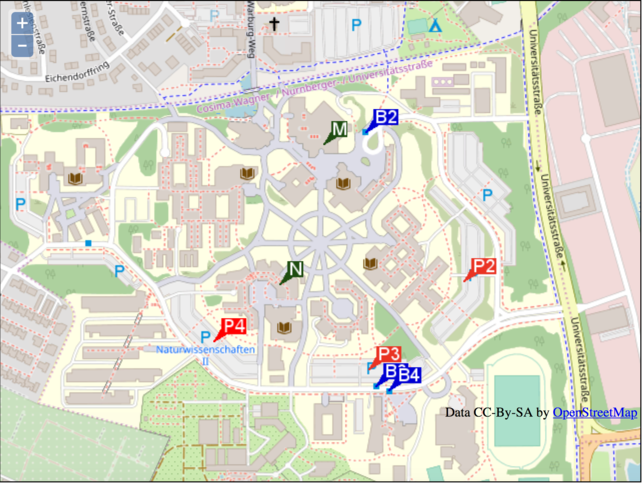 Additional maps of the university:

Arrival by car or taxi

If you arrive by car or taxi, then the parking lots "Parkplatz P3 - BGI" (P3) or "Parkplatz P4 - NW II" (P4) are the closest to the building NW II, the parking lot "Parkplatz P2 - Mensa" (P2) is the biggest one. Please make sure to enter the campus through the main access at the traffic light (see the slightly old map with the highway exit).

From the city center, enter the ring road ("Hohenzollernring/Wittelsbacherring") and follow the signs to "Universität".

If you travel from abroad, Bayreuth is situated in the northern part of the federal state Bavaria at the highway A9, around 100 km northeast from Nuremberg (Nürnberg).

Arrival by plane or train

If you arrive from outside Germany – unless you prefer to take the train – the airport of Nürnberg (NUE) is the most convenient one for reaching Bayreuth. From Nürnberg Airport travelling to Bayreuth by U-Bahn (underground) and train takes 1 1/4 to 1 1/2 hours.

At the ticket vending machine of the VGN (VGN = Verkehrsverbund Großraum Nürnberg, i.e., public transport in the metropolitan area of Nuremberg) outside the airport terminal you can buy a ticket directly to Bayreuth which is valid both for the U-Bahn and the train. This is more convenient and cheaper than buying a ticket from the airport to the railway station and then another ticket from there to Bayreuth. The price of the ticket is currently €12.30 (as of January 2020). Information about connections are available from the travel information of the German railway.

Please be aware that most of the trains from Nürnberg to Bayreuth consist of several parts with different destinations (one to Bayreuth, a next one to Hof resp. Dresden via Marktredwitz and possibly another one to Amberg/Schwandorf) and only one of them runs to Bayreuth. The train parts will be separated at Hersbruck (rechts der Pegnitz) und in Neuhaus (an der Pegnitz). Please watch the announcement boards at the platform in Nürnberg and the message boards outside & inside the train to make sure that you board the right part of the train.

Alternative airports are Munich (MUC) and Frankfurt/Main (FRA) from which you can reach Bayreuth by train in 3-4 hours, which can be faster than waiting for a connection flight to Nürnberg. It may thus be worthwhile to compare several options (train timetables are available from German railway).